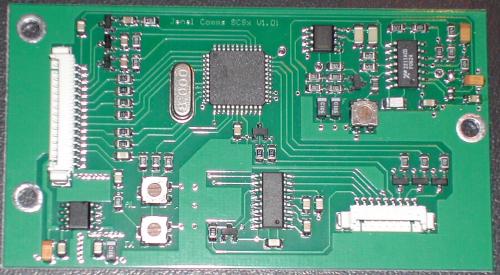 The SC90 is a small module designed for installation inside the Kenwood TK-90 HF radio to add the additional capabilities of Selcall, Telcall and GPS position reporting. The SC90 requires a microphone with a 16 key keypad to control it's functions. Information from the SC90 is displayed on the Kenwood TK-90 LCD display.

The SC90 software allows for 10 memory locations for storing those commonly used Selcall or Telcall numbers. The memories can be easily saved, recalled or deleted using the microphone keypad. Stored telephone numbers can be checked on the Kenwood TK-90 display.

A ten location recent call list holds the last ten calls received and shows the selcall number of the calling station plus telephone number or GPS co-ordinates as required. This list is cleared when the radio is powered off.

When installed in the Kenwood TK-90 radios the SC90 can also control channel scanning (up to 20 channels) and audio muting while providing outputs for driving alarm (eg. horn) relays as well as sounding audio alarms.

With the SC90 installed in your mobiles you will be able to carry out vehicle tracking and location using your existing HF network. A base station radio that is capable of receiving the GPS information is required. A suitable base radio is the Barrett 950 or 2050 and a PC running the Internav software.

The SC90 is easily programmed with a PC or a laptop via the GPS data port. Simply running the SC90 programming software will put the unit into programming mode.

Once in programming mode the SC90 can be configured by using the freely available programming software. Click HERE for a screen shot. See the manual for more details.

All interfacing to the radio circuitry is through a supplied cable loom while the GPS interface is connected through a 10 way ribbon cable which is terminated in a 9 way D connector.

Jenal Communications design and manufacture a wide range of radio related devices including units which use the standard HF selcall and telcall signalling as used by Barrett, Codan, Icom and Q-Mac. Thousands of these products are being used all around the world by Governments, NGOs, Commercial organisations and Amateur Radio operators. We also manufacture a number of devices which use the common DTMF (or touchtone) signalling system.